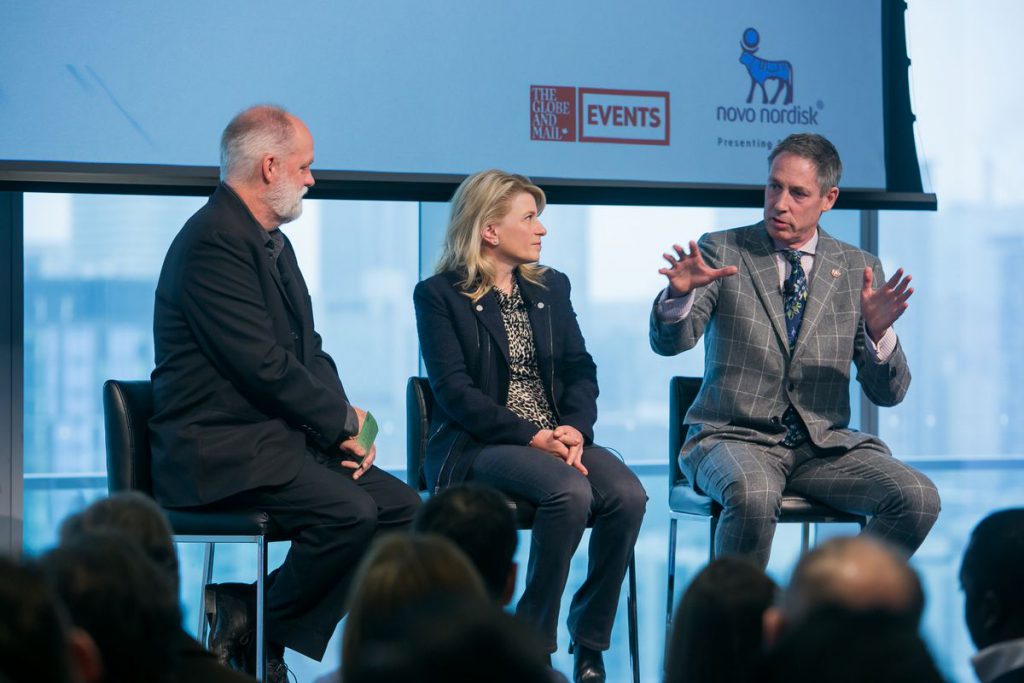 Event summary produced by The Globe and Mail Events team. The Globe’s editorial department was not involved.

Close to 300 people gathered at The Globe and Mail Centre on November 14 to join a conversation on growth strategies for the Canadian biomedical sector.

Speakers agreed Canada punches above its weight in early-stage research and clinical trials but has yet to produce a home-grown, large-scale life sciences company.

“We’re investing in this early stage research. Where are the outputs? Where is our BlackBerry of biotech?” asked Jason Field, president of Life Sciences Ontario.

Mr. Field and others called for a coordinated strategy by government to commercialize the sector, and referred to the benefits of a scale-up fund, such as the one used in Massachusetts.

“[Massachusetts] committed a billion dollars over 10 years, which sounds like a lot but really isn’t. And they legislated it,” Mr. Field said. “That made a commitment that the funds were going to be there over those 10 years, regardless of the four-year political cycles.”

He said Canadian biomedical assets are just as strong as those in the U.S. though investors in Canada often require start-ups to validate their technology outside the country before they’ll take a chance.

“[Start-ups] end up going to the U.S. and they’re inundated by investors who don’t just want to give them what they’re asking for, but want to give them much more,” he noted. “Then all the investors in Canada are lined up but it’s too late…I think we need a little bit of Canadian pride.”

Shana Kelley is all too familiar with the start-up journey. From Boston herself, she has launched several biomedical companies and is an inventor on more than 50 global patents. She said Toronto is an exciting place to be for biomedical innovation and the sector is poised for growth, provided we use the right strategies.

“We still have a ways to go. We still need more ways to get [innovations] out of the academic environment into start-ups, into companies so we can really realize the full potential of our ecosystem,” she said, adding universities can also help by cultivating an entrepreneurial mentality in biomedical students.

She pointed to the benefits of collaboration within universities, which have traditionally operated in faculty silos. The University of Toronto has developed a new program called PRiME, which brings multiple faculties together to work on medical breakthroughs focused on unmet patient needs.

Andrew Casey, president and CEO of BIOTECanada noted Canada has all the building blocks for biomedical success, but is missing the roadmap.

“A lot of [jurisdictions] have blueprints and game plans for their industries and we don’t really have one in Canada for that purpose. We need to develop that,” he said. “Investment dollars and talent are like tourists. They’re roaming around the world looking for a place to go…You’ve got to put in place the infrastructure and…the game plan that makes it attractive to be here.”

Unlike Canada’s traditional sectors such as mining and forestry, biomedical technology is portable and can easily be taken out of Canada if entrepreneurs and investors find better opportunities elsewhere, he added.

One of Canada’s most notable biomedical start-ups is Vancouver-based Zymeworks, a clinical-stage company focused on developing new or improved protein-based drugs.

Ali Tehrani, co-founder, president and CEO of Zymeworks, participated in a panel discussion focused on commercialization. He decried the cutting of government funding programs in some regions, especially the Scientific Research and Experimental Development (SR&ED) fund.

“There are parts of this country that are cutting SR&ED. How does that make sense?” he asked. “Without SR&ED [Zymeworks] would have been dead. We came down to our last $300 with 50 employees with a monthly burn of $60,000. Three hundred dollars was left in the bank account. We didn’t let anyone go, no one was fired…The thing that saved us was that SR&ED cheque.”

The panel also included Daniel Hetu, managing director with Lumira, a venture capital company that invested in Zymeworks. Mr. Hetu noted large institutional investors have been reluctant in the past to invest in biomedical start-ups, but they’re starting to come around.

“There are some signs that some of these institutions are coming to recognize there could be returns…I’m optimistic,” Mr. Hetu said. At the same time, the industry is providing plenty of good investment options, he added.

“We’re now seeing this emergence of new companies that are more mature. Even though they’re early stage, they’re mature in the sense of having the right people on board with the right plan. They’re better equipped.”

Even so, biotech start-ups usually encounter a gap in funding, noted both Mr. Hetu and Mr. Tehrani. Venture capital is available for early-stage companies, and there are large investments that occur in mature firms, but companies in the mid-growth phase often struggle.

Evelyn Pau agreed. As vice-president of investment banking at Bloom Burton, Ms. Pau focuses on pharmaceutical, biotechnology and healthcare companies. During the panel discussion she said the type of investment biomedical start-ups need is usually found in the U.S.

“Our major network is U.S. healthcare institutional investors,” Ms. Pau said. “They understand the risk of the earlier stage companies and that’s why a lot of the…knowledgeable investors look at these opportunities, which are somewhere in between the [venture capital stage] to the next big $100 million. So we kind of fill that gap but in Canada we haven’t seen a lot of those investors.”

In addition to investors, the biomedical sector would also benefit from public-private partnerships, added Vicky Chan, vice-president of clinical development, medical and regulatory affairs at Novo Nordisk Canada. She referred to a partnership Novo Nordisk currently has with the Province of Alberta and the University Hospital Foundation to spur innovation in long-term outcomes for diabetes patients.

Reflecting on her experience working in several countries, she said Canadian biomedical investigators and researchers are among the top in the world, and the number of clinical trials taking place in Canada creates a hotbed of innovation.

“At any given time [Novo has] over 25,000 patients in our clinical trials. Just this year we started four very large upcoming trials,” Ms. Chan said.

Tech investor and former Dragon on Next Gen Den, Michael Hyatt, closed out the event with a look at the drivers of innovation but also discussed his foundation’s new investment program for scientific breakthroughs.

Using a venture philanthropy model, the fund will invest in promising medical discoveries. If the technology becomes a commercial success, part of the revenue will flow back to the fund to support other early-stage research, creating a virtuous circle of funding and scale-up, Hyatt said.

Despite calls to action on investment, partnerships and infrastructure for the biomedical industry there were also plenty of reasons for optimism cited by the speakers and guests throughout the morning.